Tri Harder – Part 4, Why do we consider carbon payback?

What is carbon payback and why do we consider it? We tend to focus primarily on operational energy and carbon in the property industry forgetting about the carbon associated with the manufacture and installation of building components. The amount of information and awareness of carbon emissions is increasing at a rapid rate. We can now look at operational carbon efficiency techniques and analyse how much carbon it takes to manufacture and install them.

The next question – how long does it take to payback the carbon used in the manufacture and installation of a trigen unit?

First some background on carbon emissions by sector.

In Australia we have carbon emissions from a wide variety of sources – electricity to run buildings, transport, agriculture and manufacturing. The pie chart below shows a typical years worth of carbon emissions by sector. 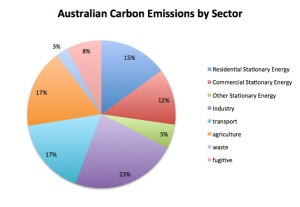 So when we get to the point of spending money (embodied carbon emissions in industry sector) to reduced the energy used in our buildings (operational carbon emission in the commercial stationary energy sector) we need to make sure that at some point we will be saving enough money (carbon payback) to payback our investment. Financial payback is pretty much the same as carbon payback. The ultimate goal must be to reduce our total emissions from now on.

On to the calculations.

Using the same large office building as in Part 3 and typical efficiencies of 36% electrical efficiency and 42% thermal efficiency and a two stage absorption chiller we can calculate the how long the it takes to payback the operational carbon. The accurate calculation of embodied carbon should be done on a project by project basis as it varies considerably, if you have to dig more basement volume to house the trigen unit then it will double the embodied carbon, however for the purpose of this exercise I have used the average australian embodied carbon figure of 1kgCO2 per Australian dollar spent.

Typical carbon paybacks in Victoria are good, two years for trigen and 2 1/2 years for onegen.

The carbon payback increases, 3 1/2 years for trigen and onegen doesn’t quite get there. It almost does towards the end of its life but then you need to spend more carbon to keep it running.

On the border for both trigen and onegen. With a carbon payback of just around 9 years for trigen it maybe that the carbon never gets paid back. And onegen forget about it.

Please note that the figures above have maintenance impact included every year in the operational carbon, the simple carbon payback calculations in Part 3  included the maintenance impact at year zero. It also doesn’t include for any ongoing improvement in the grid, if the grid is decarbonised over time then these figures will get worse. I will cover this in my next post.

So, as can be seen in the above graphs as we get closer and closer to the realisation that we need to reduce our total emissions and not just our operational emissions the concept of carbon payback will become more and more important. Calculations such as these will become common place in the property industry over the next few years.

In summary, in all states apart from TAS there is a operational carbon benefit of using a trigeneration system, but we need to think about total emissions and how long it takes to payback the carbon we invest. We need to calculate the total lifecycle emissions of the technology we put into our buildings.

2 Comments on “Tri Harder – Part 4, Why do we consider carbon payback?”