As more and more people becoming aware and believe in global warming the greater emphasis will be placed on action to decarbonise our grid. But what does that mean to trigeneration systems if the carbon intensity of the grid improves?

The next question – what happens to the carbon payback or carbon benefit of a trigeneration system if the grid decarbonises?

Decarbonising the grid will ultimately be driven by the government – not much hope there then! Or the government will be pressured by the voters (us) to decarbonise the grid – a bit more hope there. So what is there that we can use to help us understand how the grid would be decarbonised in response to pressure from us? At the moment the most relevant to Australia is the work done Professor Ross Garnaut undertook a Climate Change Review in 2007.

Within the review Garnaut outlined to options for Australia the first was to achieve a maximum of 450ppm, this was called Garnaut-25 as it committed to a 25% reduction in CO2 levels by 2020. He also outlined a fall back position of limiting to 550ppm by committing to a 10% reduction by 2020 – this was called Garnaut-10. Bear in mind that the current thinking to limit global average temperatures to less than a 2degree rise is 350ppm, not 450 or 550ppm but 350ppm.

Translating Garnaut 10 and 25 to the Australian electricity grid looks like this. 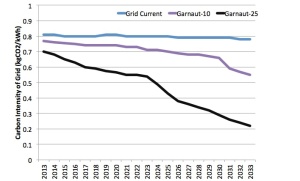 There is predicted to be some improvement in the current grid even if Garnaut is ignored – new efficiencies, technologies etc. However, what should be noted is that the black line Garnaut-25 is to limit us to 450ppm, 350ppm limit would be much lower than this!

So what does this mean to our trigeneration systems?

Let’s take the same building, trigen size and set of assumptions that we have used in the previous posts. 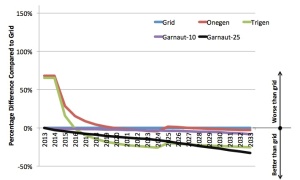 Now, how about if we are considering trigeneration for a building but we havent designed or built it yet. Well, if we assume that first year of operation is 2016 the graph looks like this. 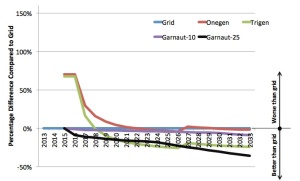 The first thing to note is that the trigen option is still achieving a carbon payback in about 5 years against Garnaut-25 and 4 years against Garnaut-10 and current grid. But it should be noted that Garnaut-25 becomes better than trigeneration at the end of the life of the first engine – basically its ok for 12 years but you wouldn’t continue with a new engine after that.

Now, the most important thing with trigeneration is that it is run for as long and as often as possible. To highlight this, the graph below considers a poorly designed trigeneration where the base load of the building consistently drops below the engine size and the trigeneration system only ends up operating for 50% of its designed run hours. 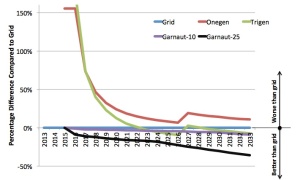 As can be seen the run hours has a significant impact. The trigeneration system carbon never pays back against Garnaut-25, pays back after 8 years against Garnaut-10 with the first engine but wouldn’t stack up with a refurbishment of the second engine.

So, as can be seen in the above graphs in NSW decarbonising of the grid will start to have an impact on the carbon payback of trigeneration, even more of an impact the later the first year of operation is. For example, if the building is being designed now (2013) and it achieves practical completion in 2016 then if the building doesn’t achieve for say 2 years then the trigeneration might not be operational until 2018. If this is the case trigeneration does not acheive a carbon payback against Garnaut-25 even at full run hours.

The analysis also clearly demonstrates the importance of run hours of the trigeneration system, if the run hours are not maximised it will have significant impact on carbon payback as well as financial payback. If the trigeneration system is only run for half the hours it would be designed for in an office building it doubles the carbon and financial payback.

← The air shower, great invention but is it tackling the right water users?
Maybe they know something we don’t! →

2 Comments on “Tri Harder Part 5 – What happens if the carbon intensity of the grid improves?”