Energy security in Australia – reasons to be concerned 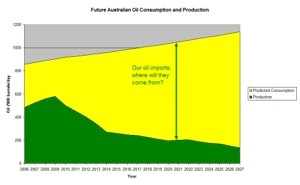 The reaction of “why didn’t I know that” always amazes me when I mention that Australia currently imports 40% of its oil and by 2030 will be importing around 80% of its oil. It is not mentioned much in the news, or in general discussions about the built environment or our lives but oil security will very soon be huge for Australia.

Australia’s Peak Oil
Yep, Australia has already reached peak oil – the point where we maximised what we could pull out of the ground and what we pull out now becomes less and less. We aren’t finding big new sources of oil within our shores – see correction at the end of this post. 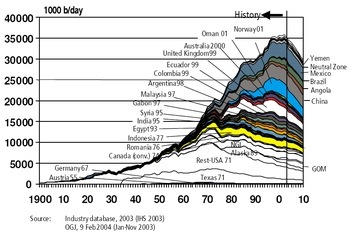 Australian peak oil happened in around 2000, our production rate has been declining since then. 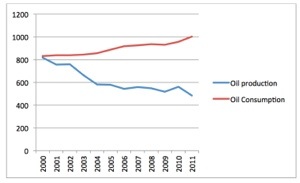 The gap between how much we have and how much we need has been widening and is predicted to keep widening.

Oil Self Sufficiency
Self sufficiency in energy is a good place to be, if you are 100% self sufficient you have enough energy to meet your current and future needs. Feldheim managed this with their renewable electricity supplies, doing it with oil is harder but none the less depleting our self sufficiency to zero is not a good idea.

Australia’s oil self sufficiency is not a good story. We are on the path to depleting our own oil sources by 2030!

Purchasing Power
So what is our purchasing power like, there is obviously a lot of politics involved but one factor for sure is – how much are you buying? We are way down on the purchasers list in 22nd, just behind Thailand – at only 1billion barrels a day, 10 times less than China and 20 times less that the US.

The US has been importing about 50% of its oil for the last few decades, so every day they buy about 10 billion barrels of oil a day, we only buy 0.4 billion barrels a day. Their oil purchasing power as well as their political strength is a lot higher than ours, let alone their armed forces budgets and demonstrated willingness to use brute force to secure oil.

The future will see a continued diminishment of our purchasing power. As larger developing countries move towards predominantly car transportation our standing on the global oil purchasers list will move southwards.

Our ability to secure a non-volatile oil price in the future will be dramatically diminished no matter how much we align our selves with China and/or the US. When you are only buying 1% of the goods on sale you don’t get much attention.

Well we could carry on regardless and expect to see increasing prices at the pump, wondering why it costs 1/3rd of our monthly wage to fill up our petrol tank to drive to work because there isn’t the public transport to get us there. We could end up with mortgage stress & foreclosures in our outer suburbs and have a massive housing crash – aka the US in 2007/08.

We could use the known fact that our own oil is depleting, this isn’t global warming scientific theory, this is real – our oil is running out.

We could invest now in electric car infrastructure – Senator Milne is pushing for a standard charging connector so they aren’t manufacturer specific, now thats more like it.

We could invest in a better public transport network to our outer suburbs.

We could increase the density of our residential areas closer to the city centres & increase density around transport hubs.

We could allow greater flexibility in planning to allow more diversity in living and working areas.

We could allow bikes for free on trains.

What else could we do? What would you do?

Our problems have been solved – Adelaide Now reports  on the 24th Jan 2013.

“Brisbane company Linc Energy yesterday released two reports, based on drilling and seismic exploration, estimating the amount of oil in the as yet untapped Arckaringa Basin surrounding Coober Pedy ranging from 3.5 billion to 233 billion barrels of oil. At the higher end, this would be “several times bigger than all of the oil in Australia”, Linc managing director Peter Bond said.

Phew, I was worried about the cost of petrol with our oil running out. Luckily we have now found a very expensive way to get oil out of the ground and cause untold environmental damage – just watch gaslands, this is what will happen here.

4 Comments on “Energy security in Australia – reasons to be concerned”