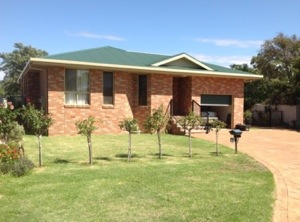 My inlaws live out in Narromine in New South Wales, about 7 hours drive due west of Sydney, another 40kms on from Dubbo.

It’s a beautiful quiet country town claiming the birth place of many famous sports stars including Glenn McGarth and Melinda Gainsford-Taylor as well as my beautiful wife Jessica.

The town is in the floodplain of the Macquarie river and had it’s last major flood in 1920 where the town was isolated by flood waters that affected road, railway line and telephone. A 1 in 100 year flood would breach the flood levy and again isolate the town.

In 2006 Narromine Shire Council commissioned a flood study, producing a map of varying levels of risk for different areas of Narromine for different storm events – 1 in a 100 year flood, 1 in 50 year flood. These flood heights are then used to determine what climate change adaptation measures should be put in place for different building types.

To help with reducing the rebuild cost after floods and to reduce the subsequent cost of insurance (which has risen by 40% this year) Narromine Shire Council has put into place an Interim Flood Policy for all new houses to have “a minimum finished floor height of 500mm above the 1 % AEP flood (1 in 100 year flood) where practicable in terms of the existing built form of the locality.”

Every new home in Narromine that falls in the flood zone has to be built about 1200mm above the current ground levels. In an area where the cost of building new homes is a significant part of the overall house and land cost adding an extra 1200mm to the floor level is a big impact. But if that 1 in 100 year flood does come the new homes will be above the flood level, as long as the water doesn’t rise 500 mm more than the 1 in 100 year flood.

Where should we focus? On new homes or on securing or adapting our existing hard and social infrastructure?

← Future Sustainable Workplace – Is it Herman Miller’s Public Office Landscape?
How to be Green – just start! →