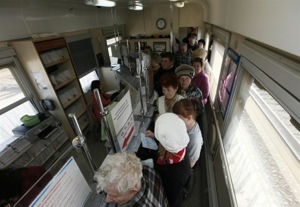 Although it may at first not appear that a Russian medical train is a possible solution to living within the means of one planet it does in fact have huge benefits. Our future needs to focus on productivity as much if not more than efficiency.

The upside
Similar to the environmental benefits of the collaborative consumption model where rather than having one electric drill owned by one person to be used for only once a year, you have an electrical drill owned by many people so that it is used often by many people.

The environmental benefit of collaborative consumption is that the resources needed to produce the drill – the embodied carbon, the embodied ecological footprint and the precious metals that go into making the drill are now shared amongst more people.

The same is true for a medical centre. If the mobile medical train serves more people than a static medical centre then the environmental impact per patient reduces for each additional person – less resources are needed to serve each person.

Calculating the differences
So how would we go about calculating the differences? Well the first and most important thing to remember is that our impact on the environment on our planet is from us, from people. If we didn’t need to drill holes we wouldn’t need to make drills, or if less of us needed to drill holes then we would need less drills, or if we shared drills we would need less drills and so the important thing is the number of people not the number of and the environmental impact of the drill itself.

Now lets consider the medical train. If the hospital was static, stayed in one place, then it may serve say 200,000 people but if it was a mobile medical centre then it may serve 5 times that. So even if the environmental impact of a mobile medical centre was twice as much as a static hospital the impact per person would still be more than half. And that’s ignoring the reduced transport impact.

The other way and probably more important way to look at it is from a productivity and efficiency point of view. The efficient use of resources in manufacture or operation is what we currently use to measure the ‘sustainability’ of a product but it’s actually how many people use the product that make it resource productive. Being able to get more people into a building, or more people to use a product or service reduces the impact of the service or product.

Broaden the thinking
The collaborative consumption movement is focused on individuals, on consumers, but governments, corporates and communities can learn from the environmental benefits of collaboration and sharing or productivity and efficiency.

We need to move beyond resource efficiency as the sole measure of sustainability to include resource productivity.