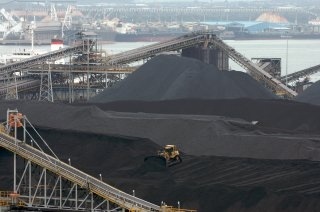 An interesting one from Grist – a report from Goldman Sachs has highlighted the financial investment risk of coal export terminals in the US.

Grist starts off by highlighting the famous Warren Buffet saying that the financial investment in new coal fired power stations is a bad bet – certainly something that has been muted in Australia. Plus the fact that a large proportion of the planned new power generation facilities are renewable or gas is a good indication of the lack of financial viability of coal, not sure what this means for CCS.

The article then goes on to suggest that US coil companies are now starting to look at coal exports as a way of continuing a revenue stream from thermal coal – if I can’t sell it locally, flog it elsewhere. We have certainly been taking advantage of the rapid growth in China and India, particularly the need for thermal coal.

According to the Australian Coal Association “Japan takes 39.3% of Australia’s black coal exports – the largest share, with a total of 115.3 million tonnes exported last financial year. China is our second largest market with 42.4 million tonnes in 2009-2010, almost double the previous year. The Republic of Korea accounts for 40.7 million tonnes, India for 31.92 million tonnes and Taiwan for 26.53 million tonnes, rounding out the top five destinations for coal from Australia.”

Seems to be at odds with what Goldman Sachs are saying “China is spending billions to control air pollution, banning imports of low-grade coal, launching carbon-trading markets, exploring shale gas, getting more efficient, and building the crap out of renewables. And remember, it has its own coal mines. They just couldn’t keep up with the boom.”

Grist reported that Goldman Sachs view is that “We believe that thermal coal’s current position atop the fuel mix for global power generation will be gradually eroded by the following structural trends: 1) environmental regulations that discourage coal-fired generation, 2) strong competition from gas and renewable energy and 3) improvements in energy efficiency.”

And this is the main reason that Goldman Sachs are suggesting that coal export terminals are a bad financial investment.

“The prospect of weaker demand growth (we believe seaborne demand could peak in 2020) and seaborne prices near marginal production costs suggest that most thermal coal growth projects will struggle to earn a positive return for their owners.”

So Goldman Sachs are betting that companies will slowly move away from coal.

I wonder if governments will move away from subsidising coal as well. At the moment the Australian Government invests about $1billion / year in coal industry subsidies – that’s a lot of bad bets!