Crickets versus Synthetic Meat – Now is your chance to try it 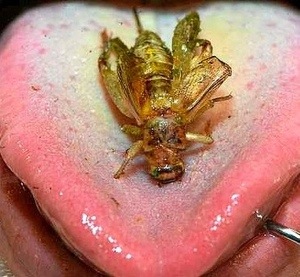 I have extolled the virtues of crickets as a protein source a few times in the past, and in my extensive survey of crickets versus synthetic meat 69% of the respondents said they would rather eat cricket than synthetic meat, 19% said they would rather be turn vegetarian than eat synthetic meat and only 11% said they would eat synthetic meat. Well, thanks to Matt Stone, now is your chance to try your answer. As reported in The Age Matt is serving up Aussie grown crickets at his zero-waste cafe Silo in the Melbourne CBD. According to The Age, “Deep-fried crickets may not be that healthy, but they are good for the planet, according to a 2013 UN report, which notes that cricket harvesting requires up to 12 times less feed than cattle ranching. It also concludes that insect harvesting can ”enhance food security” by giving poor sections of society access to nutritional products.” I think I might have to duck along on Friday and try some. Not in Melbourne? Kylie Kwong serves crickets and ants at her restaurant Billy Kwong. Image from The Age